The collective sense of truth - or perhaps the increasing sensitivity to it...and its absence - entangles those that act rashly. Not all falsehoods, spoken or practiced, are rooted in deceit - sometimes lying is a reaction to not being in a calm state of mind. Sometimes it is a reflection of insecurity or fear. Certainly, one's character has a big part to play also.

When political pundits catch a politician in a contradiction of words or reality, the 'gotcha' is almost gleeful. And the lying is expected.

When we see art that seems like fraud, we can have strong reactions as well, and the lambasting of the artist can be euphoric. Better disgust than disdain (at least for the artist, passion is better than ambivalence), but whatever it may be - when art is not created from a genuine place it feels void of meaning - and therefore a lie, and we can sometimes relish the calling out of its creator.

There are some people who are easier to be truthful with, for whom there need not be enhancement or fabrication in order to genuinely connect. This has to do with your own frequency as much as theirs, but ultimately you can only adjust your own - and that is done through action and choice. In art and in politics, one opens themselves to others beyond their social choosing, and the value of meaningfulness currency is significantly higher than during your conversations at happy hour.

We should not feel glee when we catch an other telling a falsehood. Truth should be expected. Gotchas should be disappointing. We should respect artists all the more when they meet such a high expectation, given their strange choices and challenges. Perhaps less so for politics, where truth is less evasive.

We should also not be afraid to be quiet when we don't have anything to say.

Thanksgiving and My Father’s Passing

Today is a good day for gratitude. Our father made the universe wiser last night when he joined back with The Divine Source...or, whatchamacallit. He is with us, I know, because we are of him always, but I miss him so much anyway. I am so thankful he is my father. He always will be. He taught us countless things, but one of the most important was how to know - maybe ‘feel’ is more accurate - Truth. To comprehend those moments when feeling is more true than knowing. To trust your gut sometimes, I guess. Ironic for a scientific mind. But then, he was an interesting man. Truly. He knew everything was just a theory. I miss him so much. I also plan to live so much. To truly taste, feel and do with curiosity, openness and gratitude. To give, forgive, receive and be forgiven. To love freely. To be free to be true. If you knew James Shepherd Freeman III (Skip, Uncle Skip, Papa Freeman, The Professor, The Sailer, The Wise Man) then I feel your sadness. To know him was to love him.

This message was posted above my father’s door the day before his passing. We asked the nurses who put it there, and no one seemed to know, although it’s clearly something the hospital does. The quote is unattributed. Apropos.

My brother and I looked at the moon a lot last night. His moon. 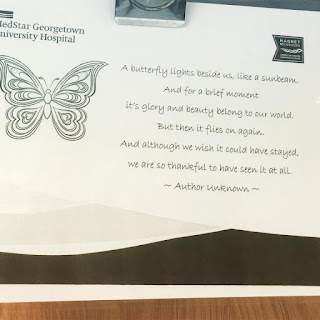 - November 22, 2018 No comments:
Email ThisBlogThis!Share to TwitterShare to FacebookShare to Pinterest

I was amazed at how weak my core was this morning. Yoga activates and utilizes our body's muscles, which strengthens us, but I clearly have not done sit-ups in a very long time. It was like my mind could not activate the muscles of my abdomen. My neck, chest, legs, arms...face were all tense, but while remembering and trying to follow the instructions for sit-ups ("squeeze with your belly, not your body"), I was mostly immobile. Everything could squeeze around it, but my core was asleep...or at least not listening.

Yesterday evening was an okay yoga practice. We opened with a prayer because of all the violence in the world. A woman interrupted the class to say she did not like how I was demonstrating because I practice along with everyone rather than showing all the poses beforehand, and requested that I redo a 'routine'. Another woman approached me after class to ask for some advice and a man said how good he felt. I missed the supercool party celebrating my husband's dance company at the residence of the Ambassador of Switzerland and his wife, which featured a performance of their recent piece “For Giulia”, inspired by a Ferdinand Hodler painting. So, you know: okay.

Ego is tough. It is difficult to ignore in one's self and in others. It shares a lot and often. It's funny and cute and interesting until it's not. We do not exist alone, so the ego has value when it informs us about our individuality. That in oneness we are many, and in many we are one. A nation is as good an example as any of collective identity composed of...multitudes. There is a lot to a Self, whether it be You or your country.

My husband, Dana, choreographed a dance some years ago called "Hyphen" (performed at Lisner Auditorium and the National Portrait Gallery in DC; as well as Skirball Center in NYC) which was about hyphenated identity - specifically Asian-American identity. He was given access to the archives of famed Korean American artist Nam June Paik, whose video work was projected and incorporated into the performance. The sound score includes the spoken line:


Does the hyphen connect or separate our hybrid identities?

All of us struggle with belonging, some more profoundly than others. Belonging means more to some than others. This is a consistent theme in Dana's work.

When we think of our core...what is it exactly? Our core is our body's center. Core values are often considered fundamental beliefs. Gut feelings should not be ignored but we should also know how to listen to them.

Maybe core values should be practices, not beliefs. I can believe anything, but I cannot practice anything. The limitation is a good and useful one. I can believe someone is bad, but I cannot practice attacking them physically - the conscience and the law forbid it; and I should not practice attacking them verbally or otherwise. So the value of 'not attacking others' or 'letting others be' is something I can follow, or practice. Believing that all others are good and decent is more challenging, no matter how much yoga I do. It's a process.

The Refugee Center discusses each of the following on its page about American values, designed to inform those new to American society:

Independence: be free to be your self - whoever that is at this moment; you should not attack or be attacked for it
Privacy: honor yours and others' sovereignty; we do not have to live nakedly
Directness: be honest and expect honesty
Equality: treat others as you would like to be treated (seriously)
Time and Efficiency: do not get stuck; move forward the best you can
Work Ethic: when you can contribute talent, time or resources, be giving with your efforts

It's challenging when we only want news/information/analysis/advice from those we think we already agree with, because doing so limits perception and dialogue. For many, the source is more important than the message, but how can we say we believe something simply because of who said it? The message should be examined with its own merit. We are a nation of conformity and diversity. We all have hyphens. But we are all inidividuals - we are all You.

I pray that we listen to our core more often. Instead of others and instead of words. Our collective American consciousness is scattered right now. We need to be quieter. And I need to do sit-ups once in a while.

Flying over the Persian Gulf towards the sunrise, I feel contemplative. I will land in Dubai shortly to switch planes.  Last night, I saw ...